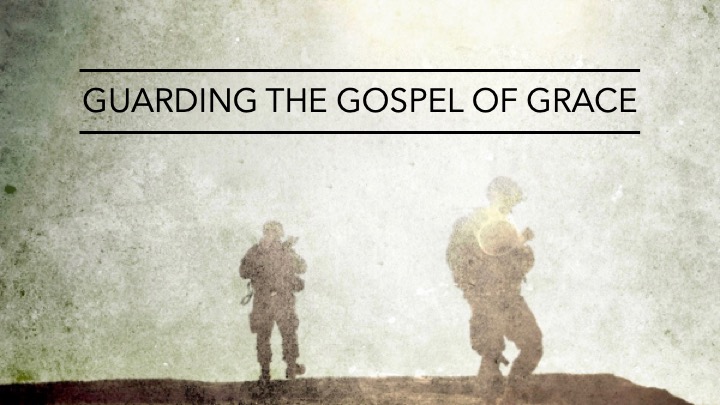 Pastor Ian shares a message from 2 Timothy 1:1-18. ‘Guarding The Gospel of Grace’.

Paul is in prison and this is the last letter to the church that was written by the apostle Paul. He is perhaps weeks or even days away from being executed and because of that, this letter is full of weight and significance.

Paul is about to die, hand over the baton of the gospel of Christ to Timothy.Because of the urgency there is a focus.

“By the Holy Spirit who dwells within us, guard the good deposit entrusted to you.”‭‭2 Timothy‬ ‭1:14‬ ‭ESV‬‬

At this points it was not Paul the Christian, but Paul the Apostle. He is guarding the gospel.

This is a significant time in the early church. The gospel message could be lost, but Paul along with other Apostles shared what they had received themselves with others to carry it on.

Each of us has a responsibility to guard the gospel and pass it on, to leave a spiritual legacy. Just as Paul had entrusted Timothy to do.

Notice that Paul did not say to defend the gospel, but to guard it. God is an intentional God and Paul too is intentional in his choice of words.

To defend is, to resist in an area. But to guard is to protect and watch over something that is personal.

Why is it important to guard the gospel?

Because the gospel is important.

Because the gospel is always under attack.

Because, Timothy (and us) will be tempted not to.

He saved us by His grace, there was nothing we could do or contribute. Without Christ we are not able to change our status, we are lost forever but through Christ and His grace we are saved eternally.

And then Again v.9 this ‘grace’ was given to us when? When we heard the gospel and believed it? No ‘…before the ages began.’ Before the foundation of the world.

Through His grace we are saved eternally.

“Therefore do not be ashamed of the testimony about our Lord, nor of me his prisoner, but share in suffering for the gospel by the power of God, who saved us and called us to a holy calling, not because of our works but because of his own purpose and grace, which he gave us in Christ Jesus before the ages began,” 2 Timothy‬ ‭1:8-9‬ ‭ESV‬‬

Guard The Gospel Because It Is Important

The Gospel is so important. Do you think that God would let it be lost?! Isn’t it amazing that this grace of Christ was given us not at the last minute, as a quick fix but before the beginning of time so that we would be equipped to fulfil the mission of going into the world and making disciples.

Remember, God is an intentional God. The gospel puts our lives now into an eternal, glorious perspective. Hebrews 6:19‘We have this as a sure and steadfast anchorof the soul, a hope that enters into the inner place behind the curtain…’

The only hope, the only saviour, the only gospel. Timothy guard it, guard it. There is nothing more important in this whole world than this gospel.

Only through Jesus dealing with our sin could the curse of death be lifted. This is our Gospel.

Guard the Gospel, because it is always under attack from false teachers.

“Pay careful attention to yourselves and to all the flock, in which the Holy Spirit has made you overseers, to care for the church of God, which he obtained with his own blood. I know that after my departure fierce wolves will come in among you, not sparing the flock;” Acts‬ ‭20:28-29‬ ‭ESV‬‬

Because satan wants people destroyed not saved by God’s grace. False teaching is one of satan’s most deadly, subtle and effective weapons.

Because we are in a spiritual battle the charge to guard the gospel is not an easy one.

There will be Times when We are Tempted Not To

Have you noticed in the text the times Paul references ‘being ashamed’‘not to be ashamed’ or ‘suffering?’ He calls Timothy to be willing to suffer for the gospel v.8 do not be ashamed of the testimony about our Lord, nor of me his prisoner, but share in suffering for the gospel by the power of God,

Yes of course to the unreceptive heart the message of the gospel can sound, so simple, unintellectual and weak.

1 Corinthians1:26-31For consider your calling, brothers: not many of you were wise according to worldly standards, not many were powerful, not many were of noble birth. But God chose what is foolish in the world to shame the wise; God chose what is weak in the world to shame the strong; God chose what is low and despised in the world, even things that are not, to bring to nothing things that are, so that no human being might boast in the presence of God. And because of him you are in Christ Jesus, who became to us wisdom from God, righteousness and sanctification and redemption, so that, as it is written, “Let the one who boasts, boast in the Lord.”