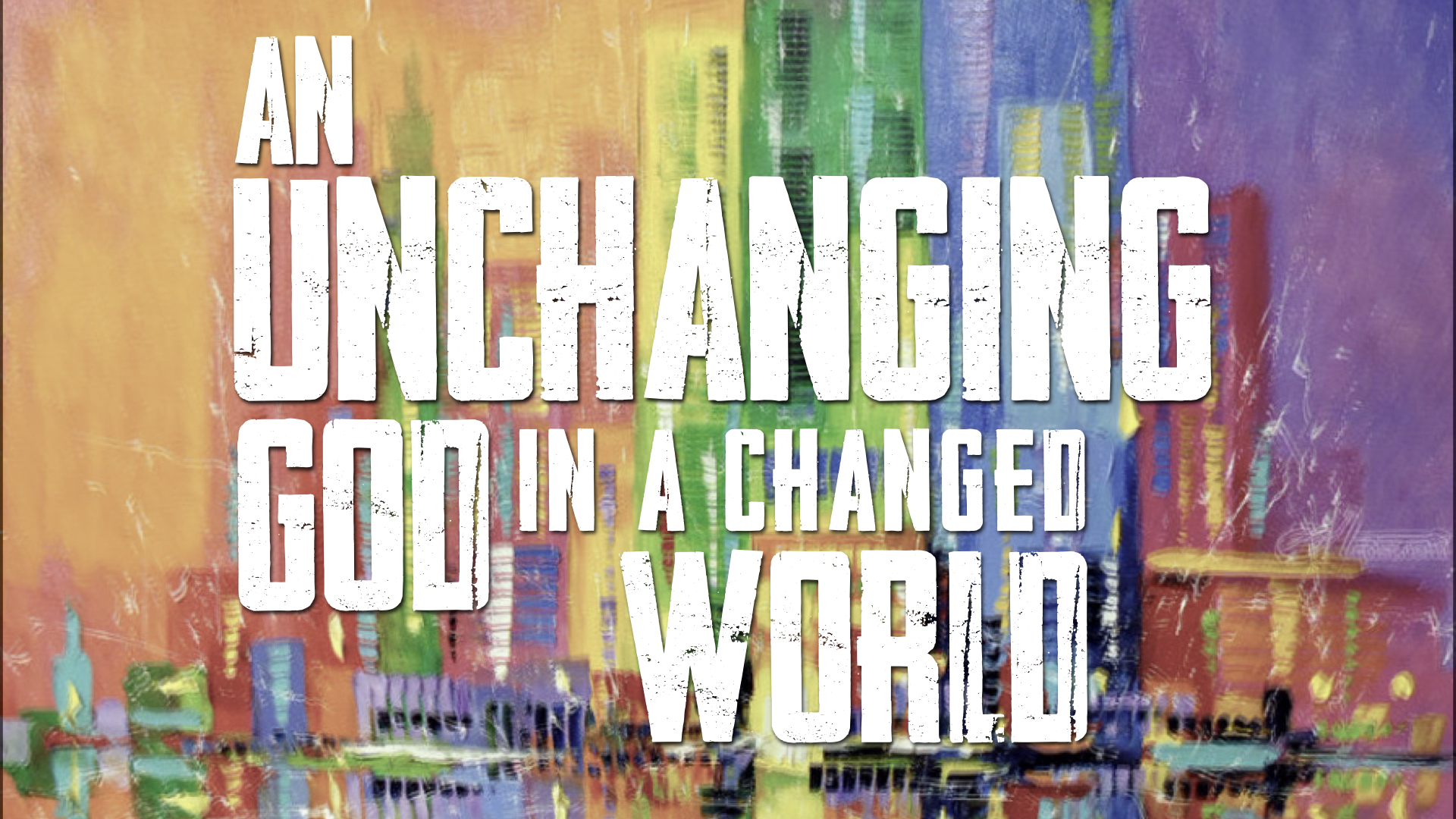 As people, we are always changing. Ever since the fall of Adam, when sin was introduced, change has been a part of life. The moment we are born, we begin to age. We grow, develop, and then deteriorate and our memory is one of the first things to go.

Our only hope in life is this: God never changes. He is the one constant we can count on while everything around us radically changes.

In theological terms, God’s unchanging nature is referred to as the immutability of God. Something is mutable if it is subject to change in any degree. To be immutable means to be unchanging and unchangeable.

Here’s a working definition: “God does not, and cannot, change in His basic character.” Nothing that God has ever said about Himself will be modified; nothing the inspired prophets and apostles have said about Him will be rescinded. His immutability guarantees this.

Here’s another definition that captures the depth and the beauty of God’s unchanging character: “All that God is, He has always been; and all that He has been and is, He will ever be.”

We can also use the word ‘always’ to express this truth about God. God is always wise, always sovereign, always faithful, always just, always righteous, always Holy and always. Whatever God is, He always is. There are no ‘sometimes’ attributes of God. All of His attributes are ‘always’ attributes. He always is what He is. – Can I get an Amen! If you know this to be true? There are many verses in the Bible that teach us this truth about God, here is a sample.

Malachi 3:6 ‘For I the Lord do not change; therefore you, O children of Jacob, are not consumed.’ ESV

Psalm 102:25-27 Of old you laid the foundation of the earth and the heavens are the work of your hands. They will perish but you will remain; they will all wear out like a garment. You will change them like a robe and they will pass away but you are the same and your years have no end. ESV

James 1:17  ‘Every good gift and every perfect gift is from above, coming down from the Father of lights with whom there is no variation or shadow due to change.’ ESV

The truth of God’s immutability is seen very clearly in the life of Abraham who was past the time in life when it was possible to have children.

Abraham was given a promise in Genesis 15 that his descendants would outnumber the stars in the sky. Genesis 15:6 tells us that: …he (Abraham) believed the Lord, and He (God) counted it to him as righteousness. Why did Abraham believe God’s promise? It certainly wasn’t because he saw the immediate fulfilment of it.

Romans 4 tells us that Abraham believed against all hope. He knew the odds were against him, he was almost 100 years old!

Romans 4:20- 21: No unbelief made him waver concerning the promise of God but he grew strong in his faith as he gave glory to God, fully convinced that God was able to do what He had promised. Abraham dialled in to God’s promise ­ He knew that God would never change what He had promised to accomplish.

We break our promises all the time and let each other down. God can always be counted on to keep His promises because He is our unchanging God.

So when God desired to show more convincingly to the heirs of the promise the unchangeable character of His purpose, He guaranteed it with an oath, God wants us to understand that His purposes are never subject to change.

When Abraham was asked to sacrifice Isaac in Genesis 22, Abraham obeyed and was about to slay his son when the Lord stopped him. After Abraham is found to be obedient, God took an oath. Listen to what Genesis 22:16-17 says: ‘By myself I have sworn, declares the Lord, because you have done this and have not withheld your son, your only son, I will surely bless you…  Why does God need to take an oath to show that His purposes never change? Isn’t His word enough?

Yes, it is enough. Actually, that is in fact, what an oath is. It’s a confirmation of the integrity of God’s Word. God’s purpose will never change ­ you have His word on it.

We change our plans all the time. We might start our day with a plan in mind but it can so quickly go wrong when our children get sick, we receive a phone call or we have a significant birthday and things spin out of control for a few days!

First part of v.18 ‘God did this so that, by two unchangeable things in which it is impossible for God to lie…’ Abraham’s faith rested on the unchanging character of God. We can count on God’s character to be the same today as it was yesterday and what it will be like tomorrow. He does not change who He is.

Abraham believed that God told the truth about Himself and God was true to His character, which He expressed in two unchangeable ways. ­ One was the original promise, the other was the oath He took to fulfil that promise. Abraham hung on to the character of God. Since it is impossible for God to lie, His promise and His oath are secure.

God is not fickle in his feelings, nor does He experience mood swings. He never has bad days or good days. He doesn’t treat us according to the whims of the moment. He is always completely consistent with Himself.

What would happen if God’s character changed? How would we approach Him if His character was in a constant state of flux?

We would never pray. We could never trust Him or step out in faith. We would never ask for His help. God’s character is the same today as it was during the time of Abraham. That’s why the Bible calls Him the ‘God of Abraham, Isaac and Jacob.’

Even though people come and go, God remains the same. He’s the same today as He was then, which means that He is absolutely reliable and completely consistent with His character.

Look at the last part of 18 and v.19-20: …we who have fled for refuge might have strong encouragement to hold fast to the hope set before us. We have this as a sure and steadfast anchor of the soul, a hope that enters into the inner place behind the curtain, where Jesus has gone as a forerunner on our behalf, having become a high priest forever after the order of Melchizedek.

Because God’s promises, God’s purposes, and God’s character never change, He has made it possible that we His people can change!

It’s great that God never changes but where would be the hope, the good news of the gospel if we could never change? But it is precisely because He is immutable that we can experience the hope of lasting change ­ from the inside out. This hope of change is an anchor for your soul. if anyone is in Christ, he is a new creation. The old has passed away; behold, the new has come. 2 Corinthians 5:17

Our souls need an anchor in these changing times because our souls are prone to drifting. An anchor is a steadying force and prevents drifting in the choppy seas of our lives. It keeps us from sliding away and helps us not be swept away by the winds of change and uncertainty. An anchor is like an immovable rock that we can hold onto. The Anchor has a name, His name is Jesus

Life and its uncertainties may shake us but God ­ who is the Rock of Ages ­ does not shake, rattle or roll. If we cling to Him, His strength will sustain us.

The anchor serves another purpose as well. The Biblical image here is one of moving ahead in safety and confidence by casting our anchor forward. One version translates last part of 18 as ‘grasping the hope set before us.’ This is a strange metaphor for most of us ­ that of casting an anchor into the future and winching our way forward.

This ancient sailing practice is called “kedging.” When storms or turbulent seas would threaten a ship that was docked in harbour, a crew of sailors would jump into a smaller boat and haul the ship’s anchor out into the sea as far as the chain would allow them to go. The anchor would then be let down and the ship pulled itself forward into deeper water on the anchor chain.

That’s exactly what Jesus has done for us. He is the anchor for our soul that v.19 says is ‘firm and secure.’ Our anchor is in heaven but our ship is on earth. And, Jesus provides us with the stability and power we need so that our lives can change now. Hebrews 13:8 says that, ‘Jesus Christ is the same yesterday and today and forever.’

Our only true hope in life is this: God never changes. He is the one constant we can count on while everything around us rages.

We are not to just drop an anchor so that we can ‘hold on’ and get through life’s difficulties. Because we are anchored to Christ, He draws us toward our future hope and changes us on a daily basis, we are to ‘move ahead.’ God is all about changing and transforming lives. Because He does not change, we can change. Because His promises, His purposes, and His character never change, we can change, better still we must change!

Once we know God through Christ Jesus we will change. Our unchanging God delights in changing His people.